I recently rewatched the CBC Doc Zone piece called The Disappearing Male about the environmental dangers affecting male fetal development. It touches on male infertility, increased male cancer rates and the underdevelopment of the male sex organ due to the endocrine disruption from all the Bisphenol A and phthalates. It’s only 44 minutes but it’s one of the most harrowing things you’ll ever watch. The idea that the placental barrier does not protect the fetus from any of these chemicals is staggering. These chemicals are in EVERYTHING. Shampoo, your sunglasses, drink containers, your car parts, your computer, clothing and on and on.

Sperm counts in young males have declined. They produce less than 1/2 of the sperm their fathers did and up to 85% of is mutated. Pesticides have been shown to cause sexual abnormalities in the development of the testicles and penis. There’s a 200% increase of male genital defects as of 2008. Male fetuses miscarry way more than female babies. The film is 7 years old now so I don’t imagine things have gotten any better. Althought Bisphenol A is now banned in most industrialized countries, I’m sure there are a ton of ones still on the market that we just haven’t decided how bad they are as of yet. It isn’t a huge leap to imagine that there is a link to the increase in reproductive problems with younger and younger couples. It used to be that only older couples did in vitro and now it seems more and more younger couples are turning to it. It’s also being anecdotely suggested that it might partially explain the rise of intersexed babies.

I was thinking though, that beyond the biological ramifications, the disappearing male is kind of a metaphor for a bigger problem. Where have all the good men gone? Manners and etiquette have seemingly gone the way of the dodo bird in the younger generations. Men seem to extend their adolescence into their 30’s now. So there is a plethora of boys and guys but where is the masculine ideal? Where is the guy that gives up playing video games and getting high with his friends? Where is the self-actualized male? Where is the educated male? More women graduate from colleges now than men do and that gender gap is growing. 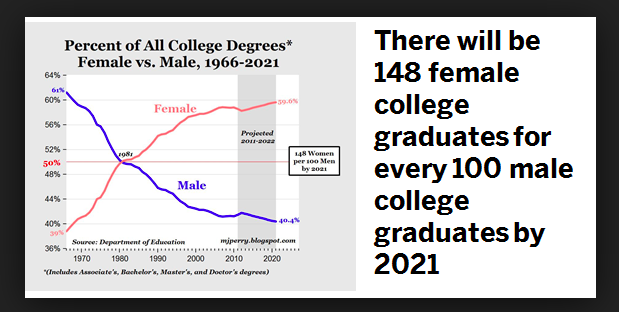 Now I realize it is hard on men. With more and more women taking on traditional male roles in society, men have been shunted to the side. There is a war being waged on traditional masculinity. I guess my question is, are men willing this in some way to happen? Are they waging the war on themselves? What happened to the masculine ideal? You know - Honor, Loyalty, Manners, Intelligence, Moral fortitude, Integrity and Self-control? If those gentlemen exist among the younger generations, why aren’t they rising up? Where is the confident man who knows what he wants and achieves it with dignity and hard work? Where is the guy that doesn’t follow the pack? Where is the guy that stands up to peer pressure, stands up for people’s rights and takes his place in society? Oh right, that guy is on the endangered list or he’s over the age of 50.

I've wondered for a long time why this is. Is it that boys are over diagnosed as having ADHD and given drugs that slow them down as children so that they don’t misbehave? Is it over nurturing from their mothers? Does feminism play a bigger role than previously thought? Is it the curse of political correctness? Or is it the inevitable offshoot of all of these chemicals we are exposed to? Along that same line, could it be the increased use of drugs – both pharmaceutical and recreational. Regardless of your medicine of choice, many of these drugs blunt affect and slow down your brain. I defy anyone to go out into the world of 20-40 somethings and find a male who isn’t either on anti-depressants, anti-anxiety meds, and/or self-medicating with alcohol, marijuana or harder drugs. Good luck finding this mythical creature. If he exists he’s one in a million and you should probably snatch him up!

I really feel that as a society we have checked out. Are we are on a break? A break…

To all the shiny, happy lovers out there I wish you a heartfelt Happy Valentine’s Day! I am…