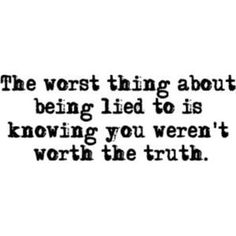 I’ve been struggling a lot lately with coming to terms with the fact that one of my dearest friends is a liar. He claims to lie only to me. His inner truth is a misguided wayfarer who I suspect also lies to the man in the mirror. Had I known this, I would have never have let him into my confidence. I thought I could put my faith in him. I thought he made good decisions. I thought he was smart and interesting. I thought he was honest. I was wrong.

I’ve been questioning whether I inspire the one thing I despise the most. Why do so many people lie to me? Look at me straight on, with clear eyes, and essentially tell me that I have no value to them. It begs the question: do I bring this on myself? There’s no doubt I am demanding. I demand the best of myself and others. Would someone be so naïve as to lie to me so as to not disappoint me with the truth? Well I suppose if you are a coward and a casuist, then it would seem to be a perfectly good reason.

I wonder what I could have done to make myself worthy of the candor I afford others. Perhaps never disapprove of anything people say or do - just give everyone a free pass. Have no judgment at all. I used to do that when I was younger but then I evolved and I found a sense of self. I knew who I was and what I wanted. If I devolved into say, my teenaged self, maybe I could live the lie.

That would mean my friend would prefer an outdated, faded, pubescent copy of me. Not the real me. Not the woman I fought really hard to become. What makes me unique, what makes me worthy of the truth is the very thing that keeps it at bay I suspect. I am intense. I am blunt. I am passionate. I am not opposed to conflict. I don’t like it, nor do I seek it, but I’m not afraid of it either. It is, like the truth, a necessary evil in life.

The privilege of a lifetime is to become who you truly are.
~ Carl Jung

The gutless want to avoid conflict so they lie and that lie becomes their truth as long as they don’t get caught. I mean, getting caught would mean facing up to who you really are: Duplicitous. Unctuous. Insincere. You are not living an authentic life. You are not yet yourself. You are not yet my friend. Self-actualization is described in Maslow's Hierarchy of Needs as:

"What a man can be, he must be. This need we may call self-actualization...It refers to the desire for self-fulfillment, namely, to the tendency for him to become actualized in what he is potentially. This tendency might be phrased as the desire to become more and more what one is, to become everything that one is capable of becoming."
Abraham Maslow

The content of my friend’s particular lies are unimportant. By nature, they are disappointing but they wouldn’t have been a deal breaker. It makes me think less of him for sure. It is nothing compared to the sting of the lies that this truth was buried under though. I wasn’t worth getting real with. I wasn’t worth much to a person I had put up on a pedestal as a pillar of virtue. He was a man I looked up to and admired. I admired, what I thought, were the contents of his character.

This has become a defining moment in my life. I am questioning everything. I’m questioning my instincts. You see, this isn’t the first liar I’ve trusted. I have swam in shark-infested waters my whole life. More people have lied to me than have told me the truth. He says he feels terrible. He says he’s sorry he hurt me. He says I don’t have to forgive him but he wants me to forgive him. He doesn’t want to do anything to achieve this though. Not if it's going to take work! He just wants me to say it’s okay and to accept that he will tell the truth going forward. He doesn’t care if I actually believe it. I get the feeling he’d be happy if I just pretended we were friends. Just “made nice.”

How To Expect More From People Who Excel at Failing

THE 4 TENETS OF THE DENIALPOCALYPSE