When I heard that they were ‘re-imagining’ Jumanji I didn’t know what to think. Do they think they can improve on the original? Are they going to make it with a bunch of unknowns? Who could ever step into the legendary shoes of the late, great Robin Williams?

I had the pleasure of being a camera trainee on Jumanji. It was an amazing experience. I was young and this was the first feature that I had ever been assigned to by the union. It just happened to be the biggest feature this town had ever seen at that time. No pressure there! On top of all that, they made me the film loader. The film shot on the Panavision Panaflex G2's and Vistavision cameras. Now loading Panaflex mags? No problem. I could do it in my sleep. The Vistavision was a bit more of a challenge and I’d never seen one before that show (or after actually). I was sweating bullets the first time I had to download exposed film from a Vistaflex mag and then reload it with fresh film stock. It’s got a challenging threading pattern inside the magazine. That movie is the only time in my life that I smoked any cigarettes. I was told that nicotine calmed you down so when I wasn’t coughing up a lung, I was pretending to be very calm.

I showed up my first day and I was sick as a dog with a wicked head cold. I was dying but I tried to pretend that I was a 100% and raring to go. We were shooting in the mansion replica set that was built in the wave pool at UBC so it was hot and humid which didn’t help my snot production problem. The 2nd AC saw through my attempt at health and sent me home. I was devastated. A few days later, I started over. Take 2!

All I remember from that part of the shoot – 1/8 of a page in the script that read “the mansion floods” and took weeks to shoot - was that Robin Williams was peeing in the pool and people were getting rashes. He was promptly chastised by Betsy, the 1st Assistant Director when he was found out. Since I was recovering from a cold, the camera guys wouldn’t let me go in the pool (bless their hearts!!) so I didn’t get the pee rash. I also remember that the Special Effects guys, Andre and Corbin, drove Bobcats back and forth in the pool to make the waves. I found that funny for some reason. Two grown men in hip waders driving baby tractors half way underwater, back and forth.

After Robin’s untimely death, I thought a lot about my experiences with him back then. I remember that he never wanted to go back to his trailer during lighting setups. He preferred to be on set to entertain the crew. He would get in trouble for this too because he distracted everyone from their work. He would do full stand up routines and have the whole crew in stitches. I asked him once why he didn’t want to go to his trailer. He said very simply “I get lonely.” He had very kind, soulful eyes and he was a very gentle man. He treated everyone with respect and there was no prima donna behavior which I appreciated. He always said hello to me every morning. I realize now that what, at the time I thought was shyness or introspection, was probably depression.

I also remember I had this t-shirt back then that he coveted. It was made by an artist named Jason J. Brown in 1989 and it was called ‘Pretty Grimm fairy tales for Streetwear.’ It was painted blue and green and had some swearing on it. He loved it. He kept wanting to trade me swag from his old movies for it but I wouldn’t give in. One, because it would be too tight on him and two, it was my favorite. In hindsight, I wished I’d just given it to him. I still have it actually. I’ve kept it all these years because of that particular memory from the show. 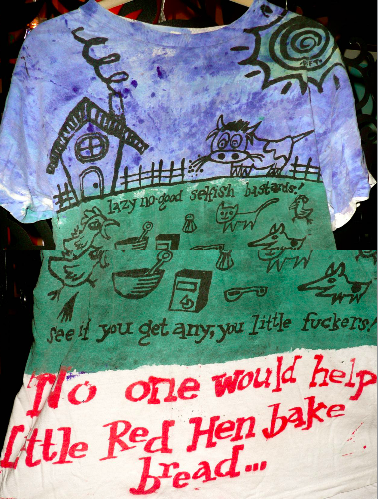 I also still have my old crew jacket – a green fleece. Robin gave everyone on the crew a signed copy of the Jumanji book and a blue baseball cap. I didn’t get the book because I hadn’t been added to the version of the crew list he was working from. I came onto the show for the last 7-8 weeks only. I did get a ball cap though but I lost it/or it got stolen on another show.

I also remember, on the final day of shooting, we had a skeleton crew and I was upgraded to a 2nd Assistant Camera. I was also the only female on the crew with long, blond hair and they needed to get a shot of the back of Bonnie Hunt’s head reaching down in a hole through the floor grabbing Robin’s arm. Only both Bonnie and Robin had been wrapped by then so it was Mike (Robin’s stunt double) and I to the rescue. I was dressed in Bonnie’s wardrobe and my hair was braided like her character and the back of my head made its feature film debut. I still had to camera assist and I slated the scene before I jumped in for the back of my head’s close up.

I also recall shooting in Stanley Park one night on the bridge and once all the condors went up in the air and the 18K’s fired up, there was a scurry of men fleeing the bushes. I came to learn that this area of the park was a notorious gay hook up spot which explained why many of these guys were pulling their pants up as they exited the now brightly lit bushes. They were like lemmings jumping off a cliff.

I had, and still have, terrible arachnophobia and I struggled working with those giant mechanical spiders. I knew they weren’t real but when they were fired up and the animatronics guys were operating them and they were running towards you, it was terrifying. I used to bite my lip really hard to keep myself from freaking out and ruining a take. Those days with those damn things were tough.

I had a magical time on that show though, and it’s one of the few projects that I worked on in my career that always delighted people when they heard about it. I was able to entertain many of my friend’s kids because of it (that and working on a Sandlot movie and a Zack & Cody movie). I’ve never met a kid that doesn’t love Jumanji and rightfully so. It’s a classic. I think that if I do go and see the new Jumanji, I might wear that t-shirt that Robin liked so much.

Crew Photo below. I have the original large size mockup that the stills photographer gave to me when we wrapped. It's a little worse for wear but I would part with it for the world.

Meme Deconstruction 4: How You Show Love